The principle of non-ferrous metal separator 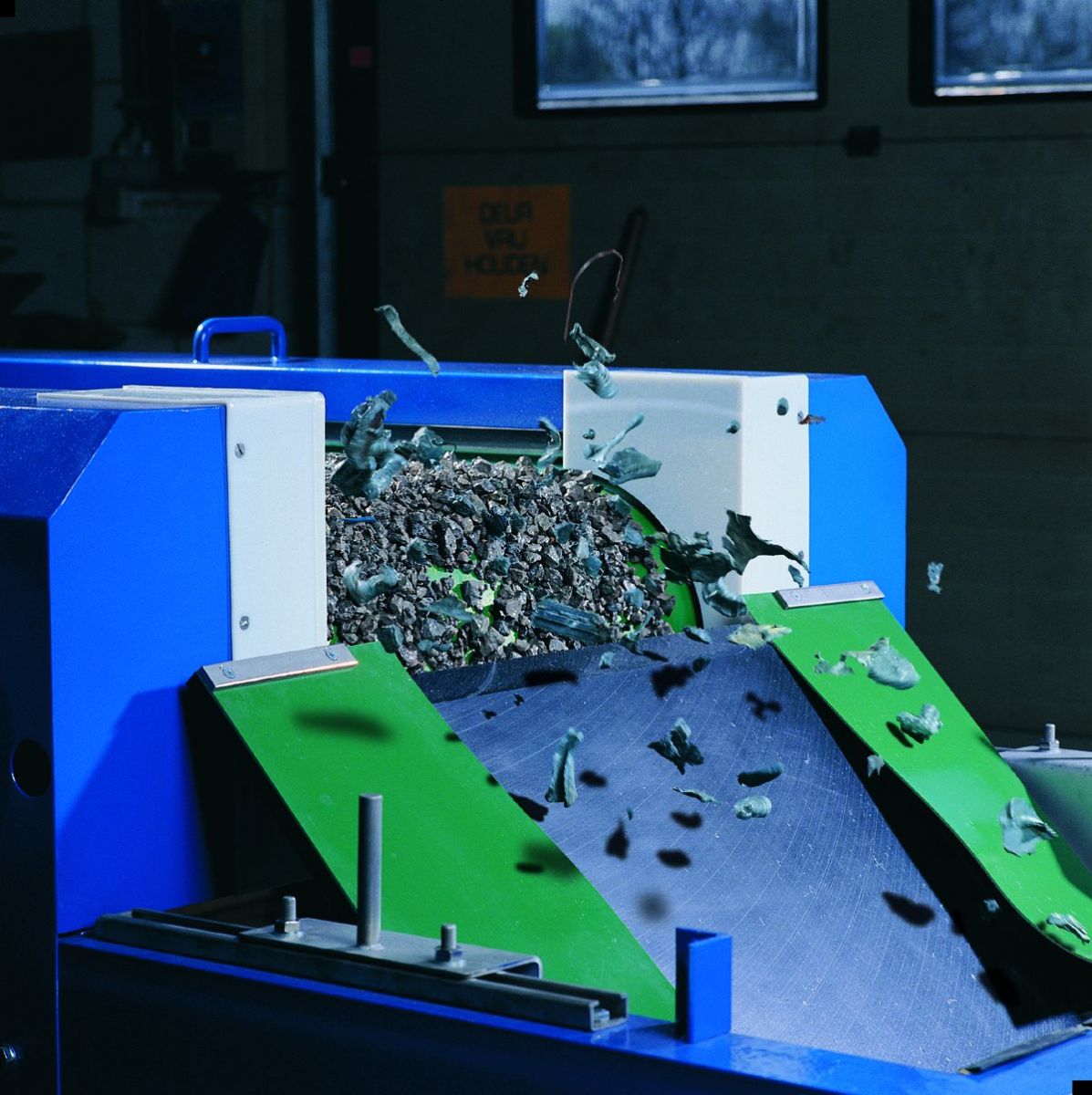 Non-ferrous metal separators (ECSM) work on the principle of varying action of eddy currents on materials with different electrical conductivity (metals and non-metallic materials). In this type of magnetic separator is the starting material is transported along a conveyor belt towards a rapidly rotating magnetic inductive cylinder which is composed of a large number of alternating magnetic poles. Magnetic induction rotating cylinders are rapidly changing magnetic field which generates eddy currents in metallic objects present in the transported raw material. Eddy currents counteract the cause giving rise - there is thus a repulsive force interaction between the metal object and the nearest magnetic poles induction rotor. The output from the interaction between the metal object and the induction rotor is, the metal particles are spouted from the conveyor belt in the vicinity of the induction rotor. 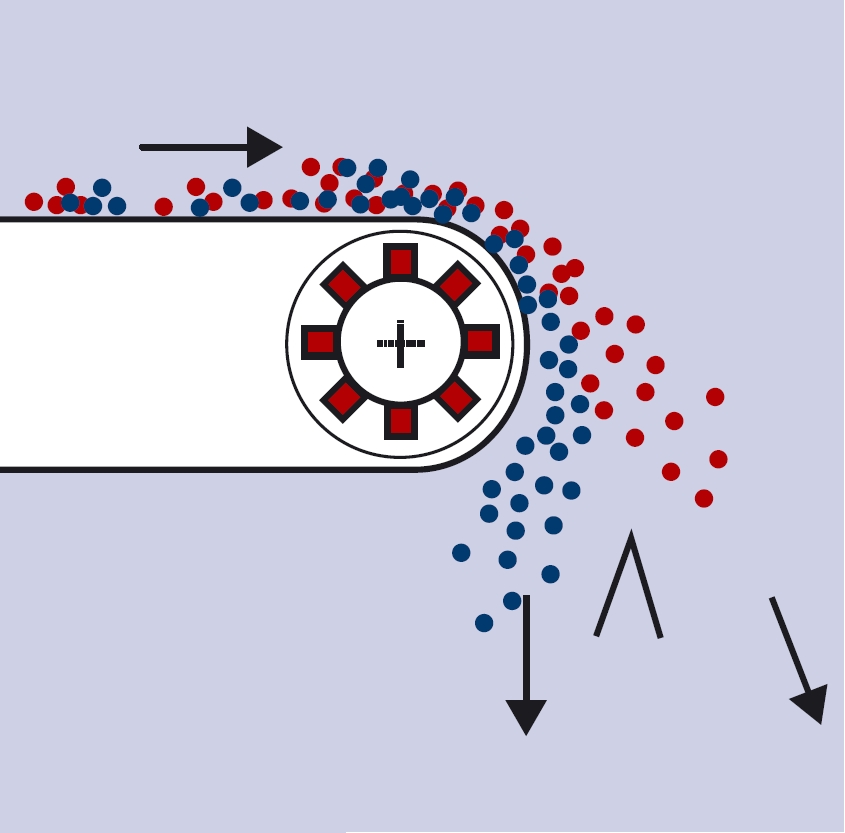 The latest generation of magnetic separators of non-ferrous metals company Bakker Magnetics has been developed as a modular system, which means that the various components can be located on the backbone of the system. This concept allows you to change the configuration of the entire separation system easily, quickly and efficiently. Moreover, such a modular design allows incorporation of components into the existing operations and also greatly simplifies system maintenance.

The skeleton of the first ECSM

The modular system of the two steel beams, which together with the casing forms the matrix of the system. The two side frames are provided with mounting plates, for fastening of the precipitation vessel, the vibrating feeder and / or a magnetic barrel which serves to remove ferromagnetic particles of the material flow. All of this design provides a solid and stable storage of the system. Great emphasis was placed on the quality seal of important parts of the system to avoid damage and lead to excessive wear of vital parts, accumulation of dust and other contaminants that may occur in the installation ECSM separators.

The conveyor belt is guided and regulated by the barrel of the curved surface, the belt tension can be easily adjusted. Monitor the operation of the conveyor belt, two sensors located on the bottom side of the conveyor. The belt is driven by a motor with an output of 2.2 kW. The actual conveyor belt is heat-resistant, made of wear-resistant PU. Inductive roller (magnetic rotor) is built into the polyester reinforced with glass fiber drum with a ceramic coating.

The magnetic rotor is built into the return conveyor drum. The speed can be continuously adjusted in the range from 500 to 3,000 min -1 (maximum tested value is 3500 min -1 ). The magnetic rotor is powered by a 7.5 kW motor Euronorm, the motor is placed inside a conveyor is covered and protected by the side frame.

There are principally two types of magnetic rotor:

The magnetic rotor system is made of neodymium (NdFeB) magnets N42 quality. In order to achieve the minimum possible air gap between the rotor and the material, each magnet has a radius. The whole magnetic system has been designed and optimized using special software. The result is a magnetic rotor able to create a very strong variable magnetic field, which has a major impact on increasing efficiency ECSM separators.

Great attention was paid to the durability and reliability of induction and reversible drum. Reversing drum is made of polyester reinforced with glass fibers, the drum surface is coated with a ceramic protective layer and heat resistance.

Separation containers are available in three different models according to the product type and capacity. Setting the separation plate is quick and easy to almost any position and angle using quick-elements. Thanks to structural parts and no impact neprakážajú material flow.

The heart of the control system is Siemens PLC, which is controlled by powerful processor. The control unit allows a number of different settings separation system. Operation is simple, any change in the setting is immediately displayed on the LCD backlight. Basic language versions are: English, Dutch and German. Thanks to the continuous control and monitoring functions of the control unit, the operation is safe, efficient and reliable. All failures and service intervals are indicated in the display. In addition to digital circuits, the control system is equipped with two continuous frequency converters: one with an output of 2.2 kW for driving the conveyor belt and the other with power 7.5 kW with brake cylinder for driving the induction. The unit allows you to set four default settings, the control system is integrated into a compact system enclosures.

Vibrating serves to evenly feed of the conveyor belt unit ECSM. The construction is of stainless steel AISI 304 is available in two sizes: 1500 and 2500 mm.

Capacities in the table are informative, calculated for ECSM unit type 1500th

Non-ferrous metal separators have their technical and physical limitations:

For these reasons, it is needed the most detailed analysis of the basic raw material, its composition and terms of separating before the actual deployment ECSM separation system.